Know what you're looking for? Search here ...

Traditional Acupuncture is a form of healthcare that has been practiced in the Far East, particularly in China and Japan, for many thousands of years. It is successfully used to bring benefit to millions of people, with a wide range of health issues, both acute and chronic.

Traditional Acupuncture is based on a view of the world that is different to that held by Western science. Health is considered to be more than simply the absence of recognisable disease. By looking at health from a fresh perspective, Traditional Acupuncture can be helpful for people who have explored 'conventional' western medical treatment without success. It can also benefit people who have nothing particularly the matter but are nevertheless looking to maximise their potential and make the most of life.

Although acupuncture is often thought of in connection with stopping smoking, weight control and pain management, there's a lot more to it than that.

The ancient Chinese found that Vital Energy, known as qi (chee), should flow naturally and easily through the body in channels. When we have had to cope with more than our bodies can healthily handle, these flows can become distorted or imbalanced, leading to dis-ease. By accessing the channels at various points, balance and flow, and therefore health, can be restored.

The flow of qi can be affected by a number of factors, traditionally thought of as Internal, External, and Miscellaneous causes of disease. Internal causes cover emotional states, such as worry, sadness, anger, fear and grief. External causes encompass climatic conditions, which traditionally related to weather, but are just as concerned with modern climates arising from central heating and air conditioning. Miscellaneous causes include trauma and injury, poor diet, poisons, infections, hereditary conditions, and long-term patterns of lifestyle or behaviour.

Many presenting symptoms are due to a combination of these various causes, and in this sense Traditional Acupuncture is 'holistic', in that it takes account of your physical, mental and emotional condition in order to diagnose and treat.

The origins of acupuncture are attributed to Huang Di, the Yellow Emperor, a semi-legendary ruler from around 2700-2600 BC. Among his many achievements, he is said to have written the Nei Jing Su Wen, the Classic Treatise on Internal Medicine, regarded as the world's oldest medical textbook. The book takes the form of questions posed by the Yellow Emperor, and answers provided by his teacher Qi Bo.

A great deal of time was spent in observation of Man and of the natural world, of disease and, refreshingly, of health. The Chinese looked at living things and how they behaved. They recognised that, as our surroundings change, during the course of the day, through the seasons of the year, or through the years of our life, those who are able to adapt to change remain healthier. Treatment strategies were developed and recorded to deal with a vast array of conditions, to restore the balance between the patient and the surroundings that influence them.

Over many thousands of years, generations of scholars and sages have developed the concepts contained in the Nei Jing into the rich and diverse medical system it is today, with a common theoretical framework supporting a great number of schools of thought.

In part because of the cultural respect for the sacredness of the body, surgery as a technique was never widely developed as a part of Chinese medical practice. One great benefit of this to us today is that Traditional Acupuncture has instead evolved many elegant techniques for dealing with internal problems, without the need to resort to invasive surgery with its attendant risks and complications. 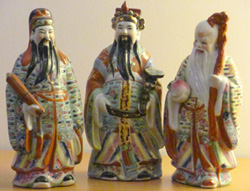 In the clinical practice of acupuncture, there is room for a wide variety of styles, often with slightly different emphasis or approach. Wallace practises a style often known as Five Element acupuncture, which draws on developments arising in Japan and Korea, in addition to those of the Chinese tradition. Its techniques were brought first to France and later to Great Britain, during the 20th Century, and the style has grown in popularity and availability since then.

The Five Element approach is found to be particularly suited to use in a Western setting. For one thing, its needling techniques are considerably gentler than some in the more Chinese schools.

For those who are interested (and many people are intently interested in how this wonderful system of health works!), Wallace normally has a few copies of a short book explaining Five Element acupuncture to existing or prospective patients, available to buy or borrow. You may be surprised how simple it all is, at its heart.

N is for Natural 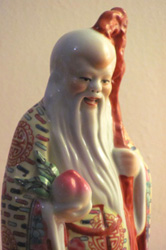 In the course of addressing your main complaint, it's not uncommon for you to experience a range of additional positive side-effects, as other aspects of your health also improve. And, even if there is no specific change in your main complaint, you may feel general benefits that allow you to cope better.

By evaluating your present condition, Traditional Acupuncture is also able to treat 'the disease which has not yet happened', and as such can form a useful part of a preventative health programme, keeping you well and letting you fulfil your full potential - getting in touch with the You you're meant to be.

What can be treated?

Wallace treats people. The Chinese philosophy behind Traditional Acupuncture does not view the human being as a collection of separate parts, but rather as an interdependent whole. Accordingly, pain or dysfunction is viewed as part of an overall picture of health, rather than as an isolated problem. Restriction or dysfunction in any one area can give rise to symptoms in another area.

As a general practitioner treating people, Wallace prefers to avoid 'specialism', which tends to focus on the problem as defined by a Western medical diagnosis. We are all individual, with individual challenges and opportunities, but ultimately our similarities are greater than our differences, and Traditional Acupuncture speaks very effectively to this commonality.

"Natures differ, and needs with them; hence the wise men of old did not lay down one measure for all" - Chuang Tse, 4c BCE

It is not straightforward to give a definitive list of conditions that can be treated, because with Traditional Acupuncture it is not the condition that is treated, but the person suffering from it.

The British Acupuncture Council has started publishing online a series of Fact Sheets giving information on a number of common conditions. These can be accessed from the following links (which will open in a new window).

In 2003, the World Health Organisation published "Acupuncture: Review and Analysis of Reports on Controlled Clinical Trials". The full report used to be available to read on their website either here or here. However, the WHO removed the old version of guidelines from their website in 2014, and never popped up a replacement document, nor responded to 'broken link' requests - hence the Page Not Found messages today. This 2003 study identified a large number of diseases and disorders they found can be treated with acupuncture; the list used to be given on the WHO website, and was reproduced here in 2009. When reading this, please bear in mind that with Traditional Acupuncture it is not the condition that is treated, but the person suffering from it.

Although fertility, conception, implantation and gestation can be greatly assisted by a wide variety of modern techniques, the importance of healthy parents cannot be overlooked. If you are planning a family, Traditional Acupuncture can help get you and your partner as well as you can be, so that nature can take its course. You may be looking for a helping hand from modern medicine, and Traditional Acupuncture can support you in this. Think about starting treatment in good time, so that you are in good shape, physically and emotionally, for the significant changes that will come in your life, and for your role in the start of a new life.

If you seriously want to stop smoking, or lose weight, Traditional Acupuncture can help you review your relationship with your body so that you feel inclined to treat it better. Indeed, reductions in desire for addictive substances, and changes in weight, are often noticed as positive side-effects during the course of treatment for other things. However, Wallace does not offer treatments involving needles or studs in the ear to suppress craving, but instead can offer support to address the source of your cravings.