Know what you're looking for? Search here ...

Wallace qualified in 1998, after three years of intensive training with the College of Traditional Acupuncture (CTA). The College was founded in Leamington Spa by the late JR Worsley. In the mid 1990's they ran a satellite programme in Glasgow, and Wallace was one of a handful of graduates from that programme. Sadly, CTA closed its doors around 2011, but the traditional is being carried on in Leamington by The Acupuncture Academy (TAA)

Post-graduate studies have mainly followed the teaching of Niki Bilton on her regular visits to these shores, both at the College of Traditional Acupuncture and as part of her Welcome Gate study group.

Other studies have included the work of Peter Firebrace and Stephen Birch, and involvement with the local Regional Group of the British Acupuncture Council (BAcC).

Wallace's practice does not include the prescription of herbs, or massage. The Five Element tradition is founded on achieving optimal results through the use of needles and moxa alone.

Prior to setting up in practice, Wallace was a member of the Royal Institution of Chartered Surveyors, with 20 years experience in the construction industry, but grew tired of the culture of confrontation. He attributes the change of direction to the benefits of ongoing acupuncture treatment. Anything is possible - Traditional Acupuncture can help you get in touch with the You you're meant to be.

On qualifying, Wallace was accepted as a member of the British Acupuncture Council, the UK's main professional body for practitioners of oriental styles of acupuncture. This guarantees adherence to a strict code of professional conduct, including patient confidentiality, and a world class system of Continuing Professional Development.

The BAcC are working closely with government on the matter of statutory regulation - see the BAcC website for current details.

In 2005, acupuncture practitioners were grouped together with tattooists, body piercers and others for the purposes of the Regulation of Skin Piercing in Scotland. Under this legislation Wallace is licensed by Perth & Kinross Council - a further guarantee of high standards.

Wallace is an experienced public speaker, having addressed many groups around Perthshire and beyond over the years.

Wallace is a supporter of the Perth Rotary Club Silent Auction. 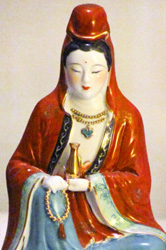 Wallace is an active member of, and volunteer instructor for, the Taoist Tai Chi Society of Great Britain. Training and practice with the Society offers effective and practical methods for the dual cultivation of body and mind.